#ad:
We may earn a commission when you use one of our coupons/links to make a purchase. 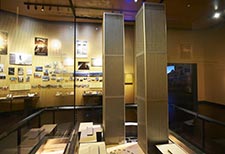 Advice: as it is still under construction all reservations must be done in advance through official website.
Location: on the spot of the World Trade Center site.
How to get: "Fulton St" subway station, trains:  2   3   4   5   A   C   J   Z  ; exit to Fulton St then to the west towards the tall skyscrapers of the new World Trade Center.
Mark on the map:

Two years after the tragic events of September 11, 2001 it was decided to build National September 11 Memorial & Museum to commemorate the people killed in the terror attacks. The construction was started in 2006. The main sights here are:

The country's largest two artificial waterfalls built on the place of the Twin Towers. Names of 2983 victims are etched in 76 bronze panels surrounding the pools. The pools were opened on September 11, 2011.

September 11 Museum is located under the waterfalls at about 70 ft / 21 m under the ground. It has some artifacts, steel remains of the Twin Towers and others. Opened from: May, 2014.